A local complementary currency designed to raise awareness about the local economy.

Launched during the banking crisis of September 2008, the Lewes Pound story was picked up by media around the world and has inspired many other communities to launch similar schemes.

When a group of us in the Business Group of Transition Town Lewes were investigating projects that we wanted to develop, a few of us were drawn to the idea of a complementary currency, which Totnes had recently launched. We continued to talk about it until the local media got wind of our idea, wrote about it and we were then flooded with national press who picked up on the local story. As our plans developed the banking crisis was deepening and our launchdate coincided neatly with the collapse of Lehmen Brothers bank, ensuring the world’s eyes were on our little project as a positive story to end the day’s news with. The plot thickened when Lewes Pounds started selling on ebay for £30 a pop (the first run was a limited edition of 10,000, which sold out in one day and immediately was sat on as speculation about the valueof the Lewes Pound continued. This flutter only ended when we printed more Lewes Pounds a fortnight later. 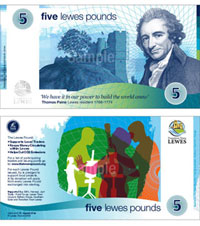 After the initial year’s trial was coming to an end and the notes were to be redeemed back for sterling, we held a review of how it was going. Many of the traders wanted to continue but pressed for higher denominations so that we could really test the Pound. Realising that we had nothing to lose, and that many other groups were also wanting us to continue, we launched higher denominations at a very popular Do at the Depot. These denominations will run for 5 years. We now have a coordinator, funded by Esmee Fairbairn Foundation, who will both promote higher uptake of the Lewes Pound among users and traders, at the same time as researching new ways of developing the Pound away from the 1:1 exchange with sterling. On that front, he is working with other groups around the country investigating truly effective local currencies.

You can read more about the Lewes Pound on our website