One of the most important men who has ever lived has recently died. He is up there with Gandhi, Mandela, Churchill and Krishnamurti. Unlike them he was not widely acknowledged during his life, being so far ahead of the curve, but his ideas have been adopted by hundreds of thousands of people all over the world at all levels, from the rebuilding of Cuba’s economy to farming in drought-stricken Africa to spiritual ecology at Findhorn. He is Bill Mollison, inventor of Permaculture.

Most people involved in the Transition Towns initiative will know that it is based on Mollison’s ideas: do what works, don’t keep putting effort into what doesn’t work, use natural processes to model solutions, co-operate rather than control, value small successes, take the long term view of everything. Rob Hopkins’ Transition idea came from applying Permaculture principles as a community-level response to global resource depletion and life beyond cheap oil.

Mollison offered something that no-one else has yet convincingly offered: a practical, detailed model for a sustainable, non-growth economy. It is a return to the more satisfying, less frenetic and also less aspirational lifestyle that our remote forebears were probably familiar with (he wrote a book on the Tasmanian Aborigines so he was clearly interested in their way of living), but perfectly applicable to modern urban life. Mollison was a dreamer, but he was a realistic dreamer. He understood natural processes by means of long and detailed observation. He developed and taught an Australian university course on environmental psychology. 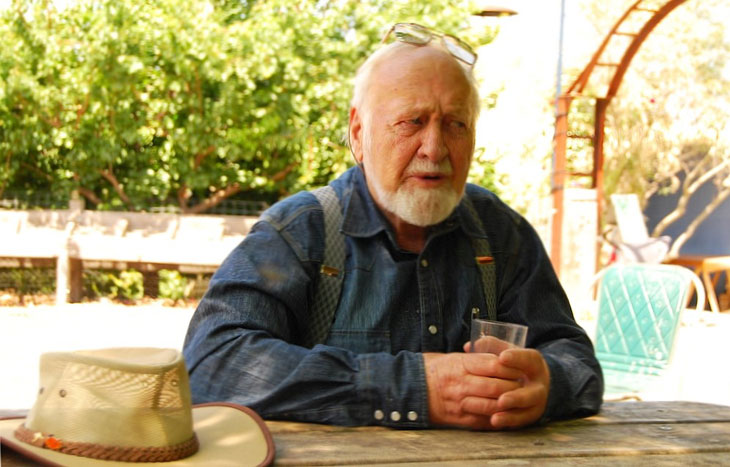 In 2011 he wrote: ‘After many years as a scientist with the CSIRO Wildlife Survey Section and with the Tasmanian Inland Fisheries Department, I began to protest against the political and industrial systems I saw were killing us and the world around us. But I soon decided that it was no good persisting with opposition that in the end achieved nothing. I withdrew from society for two years; I did not want to oppose anything ever again and waste time. I wanted to come back only with something very positive, something that would allow us all to exist without the wholesale collapse of biological systems.’ (Mollison 2011, Introduction to Permaculture)

Permaculture is not confined to techniques for growing food. It does not only mean ‘permanent agriculture’ but implies a permanence in culture itself. Said Mollison, ‘Self-reliance in food is meaningless unless people have access to land, information and financial resources. So in recent years it has come to encompass appropriate legal and financial strategies, including strategies for land access, business structures, and regional self-financing. This way it is a whole human system.’ (ibid.)

We have tried out some of these pioneering ideas in the form of local currency, producers’ market, community-financed energy generation, open eco-houses and various other projects with varying degrees of success. But to my mind, Transition Town Lewes’ most consistently successful role has been in creating awareness and providing information. We are not materially desperate here, not like in India or Africa where growing food in hostile conditions is a matter of life or death. But we are interested in a wide range of things – political, social, economic and environmental issues as well as spiritual, traditional, psychological, artistic and gustatory. We are not perhaps all as interested in engineering, building, manufacturing, finance, forestry or farming – the stuff of Permaculture.

I’ve just watched a Youtube of Bill Mollison talking about free energy in the form of compressed air using a simple technique, the trompe, which has been around for thousands of years. It involves getting air bubbles into water and then trapping the air in a chamber. Will I ever do what he’s suggesting? No. I am not going to build a large structure of metal pipes and containers with a welding torch, bury it in a hole in the ground next to a downhill stream, tap off compressed air into large metal bottles and convince people to convert their cars and workshops to work off it. I’m fascinated by the idea of free energy and I wish someone would start doing it, but it’s not going to be me, at least not personally. And I suspect the same goes for a lot of us around here. But we can absorb ideas, get excited about them, talk about them, incubate them. That is an important part of the dissemination process.

Bill Mollison grew up in the Tasmanian rainforest. He was a hands-on guy. He studied ecosystems at first hand, grew food, planted trees, built houses, set up businesses and designed all manner of practical systems that are productive, efficient, inclusive, non-polluting and don’t cause more problems than they solve. He thought them up, tried them out and developed them himself; he offered his services as a designer to individuals and communities for years without charging, until he was satisfied he knew exactly what he was doing.

Mollison was self-educated. He left school at 15 and went through a number of different jobs before ending up doing what he loved: working in, with and for the natural world; observing, thinking, concluding and extrapolating general principles that will always remain valid, regardless of political power, economic system or social conditions. They will work as well for anarchists as for aristocracy, and be equally attractive to both, because they can benefit both equally. The people they won’t be attractive to are those who like exercising power over others, but that’s OK because Permaculture is not designed for them. It is designed to work without them. Mollison has proved, among much else, that conventional education is not necessarily the best route to an effective and satisfying life – an important message for the youth of today. As he said, ‘Rainforests can give us all the knowledge we’ll ever need. If we lose all the academic establishments in the world, we lose nothing. If we lose the rainforests, we lose everything.’

See an obituary of Bill Mollison by Graham Bell here… 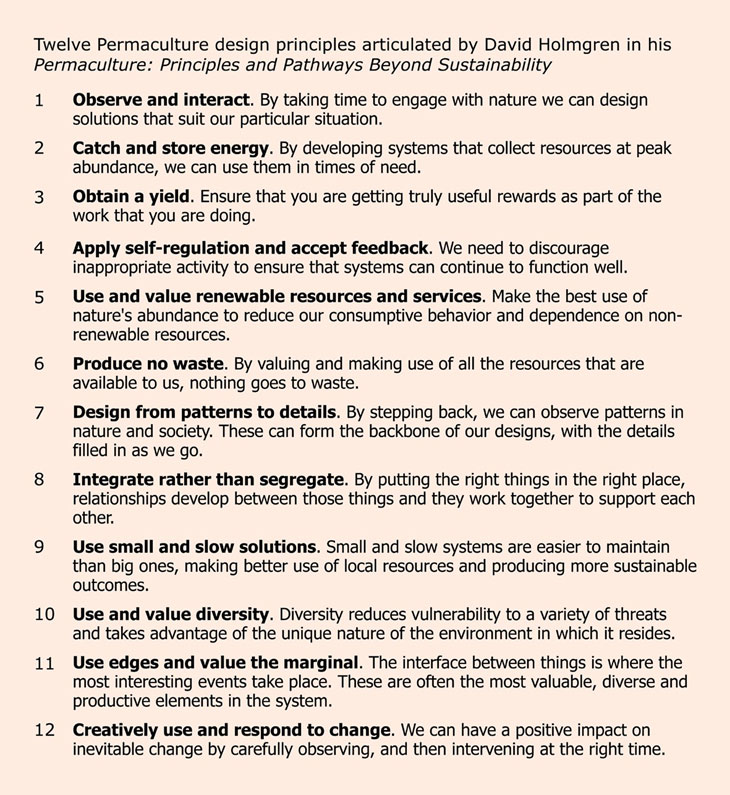